For anything to have “personality”, logic dictates that a “person” must be involved somewhere.  (Sometimes I stun myself with my own profundity.  Or, some would say, I just have a born knack for stating the bleedin’ obvious.)  Either way, bear with me.  Where I am headed with this should be clear soon enough.

I just stepped off the Viking Star after sailing from New York City to San Juan, Puerto Rico.  Why that particular itinerary?  Faithful reader, do you really need to ask?  I was invited, of course. (I would sail through the Straits of Malacca during a typhoon, an outbreak of both rickets and/or scurvy plus a worldwide pirate convention if they offered free lobster and imported wine.)  I came away from that glorious experience with the distinct impression that she is a ship dripping . . . in salt water, of course . . . with buckets of personality.

should ever be allowed to congregate in one confined space, we were graced with the presence of many Viking Cruise dignitaries even including the impressive and charmingly impish Torstein Hagen himself, the founder, chairman and CEO of Viking Cruises.

A very short way into his illuminating presentation, it struck me like a thunderbolt that, not just the ship but the entire Viking enterprise, is a reflection of his alluring personality and values.  The same should be said of his daughter Karine, whose style and touch are also seen everywhere.   Can you even imagine Apple Computers without Steve Jobs or Microsoft without Bill Gates?  Minus their respective inputs, these two enterprises would not just be radically different but likely not even exist.

Listening to Tors speak . . . I feel comfortable calling him that even though the extent of our personal relationship consists of his almost making eye contact with me seated in the twelfth row of the theater . . . I began to take mental note of the manifold ways Tors has left his imprint and imprimatur upon the new fleet of ocean-going vessels, including the Viking Star.   Let me quickly share just three examples.

Priorities From A New Perspective

I was intrigued by Tor’s take on priorities.  He pointed out that it consists not so much in selecting as eliminating.  Since time and resources are always finite, the place to begin is to decide what you are not going to include.  The Viking ocean cruise philosophy is defined as much by what is not included as what is.   Tors knows his customer down to which side of the head they part their hair.  Here are a few things you won’t find on the Viking Star and why:

Posh But Not Osh (as in Ostentatious)

There are other cruise lines that specialize in the opulent.  I understand there is one where you need a hand-written letter of recommendation from your bishop just to board.  I found it

interesting that Tors does not even like the word luxury.  What he does like to provide is incredible quality at prices that don’t require cashing in your 401K, or in my case, my .01K.   Let me give you a couple of examples of what I mean.

The Devil Is In The Details

I mentioned to someone on the cruise that I could write an entire blog post just about the bathroom.  To prove it, here at least is a section devoted to the potty.  Check out these brilliant features:

I bring this up just to illustrate that this meticulous attention to detail permeates the entire vessel.  I could easily build similar lists regarding the spa, dining, etc. 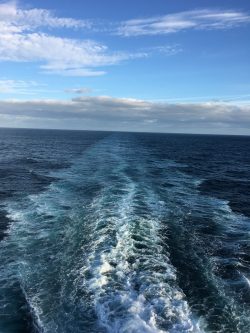 As we sadly leave the Caribbean Sea in our wake, I would like to close with this observation.  Booking a cruise, from the travel agent’s point of view, is a little like matchmaking.  In a marriage, the couple’s chances at future happiness are enhanced the more the groom knows about the bride and vice versa.  Matching the right person with the right cruise line has many parallels.

I can tell you from my experience of the past week that Viking builds their ocean ships based on twenty years of river ship experience.  They know their customers as well as anyone in the industry and tailor their product precisely for that customer.

My hope is, having read this blog, you will understand better whether you are that perfect Viking ocean cruise customer and are ready for one of our master matchmakers to craft you a cruise experience made in heaven.

Beep . . . Beep . . . Beep!   Please stand by for another “Hear It Here First” announcement.  This is NOT a test of the Travel By Terry breaking travel news alert system.

Some of you may know that Viking River Cruises has clearly established itself as the indisputable master of the world’s great rivers.  Today they have announced their plans to let some of that remarkable success flow directly into the Seven Seas.  OK, maybe not seven right away but at least a couple.   Travel Weekly has a great article this morning about Viking’s plans to launch their first ocean-going vessel, the Viking Star, in May of 2015.

The initial voyages will ply the Baltic and Mediterranean Seas.  It will fit into the mid-size category with 928 passengers.  One thing that should set it apart from its competitors in this market is the fact that shore excursions and beer and wine with lunch and dinner will be included.

“Another unusual feature will be a ‘snow grotto’ in the spa in which ‘snowflakes gently descend from the ceiling through chilled air,’ according to a Viking description,” reports Travel Weekly.   To learn more, I  encourage you to visited our branded Viking Cruises site and click on Viking Oceans tab at the top.

When your friends ask if you have heard that Viking has just entered the world of ocean cruising, I suggest you give them a dismissive look and a roll of the eyes and simply respond, “Please!  I follow Travel By Terry.  I heard about that eons ago!”