Fonte do Ouro and thereby pique the envy of their fellow enthusiasts, my apologies.  Keep in mind, this is a travel blog . . . or purports to be anyway . . . so when we toss the term “port” about we have something entirely different in mind.  We are thinking of a facility from whence one launches one’s dream cruise.

While Texas may not have yet solidified its position as the port wine capitol of the world, we are rapidly making a name for ourselves as one of the great cruise departure points.  Recently I wrote another of my little literary gems called “Galveston oh Galveston:  I See Your Cruise Ships Sailing” in which I shared a little chart that explains the current options from Galveston.  Since that post, there have been a couple of exciting announcements.

In a recent article in USA Today, it was revealed that “Norwegian Cruise Line and Princess Cruises on Thursday both announced plans to begin voyages out of Houston’s Bayport Cruise Terminal, which has been mostly vacant since being completed in 2008. Princess says the 3,080-passenger Caribbean Princess will offer seven-night sailings to the Western Caribbean out of the terminal starting in November 2013.”

“Norwegian says the 2,374-passenger Norwegian Jewel will begin seven-night sailings to the Western Caribbean out of the terminal starting in the fall of 2014.”

Since the cruise terminal has been empty for so long, this is important news for both the city of Houston and the cruise lines.   But I suspect it will also raise a lot of questions in the minds of the seafaring public about this new option.  Not to worry, dear soul.  As usual, your intrepid guide to all things travel related is here to dispense the fog, evaporate the mist, dispel the darkness, shed the light . . . you get the idea.

So the two choices that will soon be available to you in Texas are the Port of Galveston or the Bayport Cruise Terminal. Now I realize that a lot of factors will go into your cruise decision such as cruise line, the specific cruise ship, length of sailing, itinerary and ports of call.  But once you weight the pros and cons of each port, you may well want to add the port of departure to your list of considerations.

One of the most obvious advantages of sailing from Bayport is the availability of numerous flights into both George Bush International Airport and Hobby Airport.  While there will be a cost in getting to the pier, unless the cruise lines should decide to provide transfers, it will be less time and money than getting to Galveston from Houston.   If your travel plans include either a pre or post overnight stay, Houston of course offers a wide array of hotels in various price ranges.

I have not personally been to the new terminal, apparently an experience I share with close to 100% of the population, but I understand it is very modern, roomy and well designed to service cruise customers. 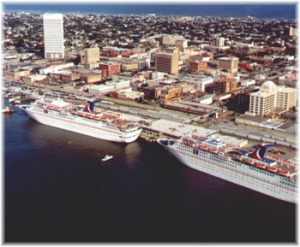 One of the chief benefits of sailing from Galveston is the number of local attractions such as the brand new Galveston Island Historic Pleasure Pier.  There are plenty of places to stay such as the historic Galvez Hotel & Spa or The Tremont House. The Strand offers lots of shopping options and contributes to Galveston being a fun place to spend an extra day or two.

Having choices is always a good thing.  Now you can pop over to the Port of Galveston and very soon you will be able to bop over to the Bayport Cruise Terminal.  The most important thing is to flop down a deposit on your next cruise.  OK, this is getting sappy even by my exceedingly low standards so I’m going to . . . yes, you guessed it . . stop.