A wag, according to dictionary.com is a person given to droll, roguish or mischievous humor; a wit.  What better way to inaugurate the first installment of Backroom Banter

than to introduce you to someone, if you haven’t stumbled across him already, whose occasionally ribald and frequently irreverent sense of humor has caused me more than one audible chuckle in inappropriate settings?  I strongly suggest you never read his blog in a library, during your sentencing hearing or in a church pew!

His name is John Heald and this brief self-introduction from the “Meet John” page on his wildly popular blog www.JohnHealdsBlog.com should suffice to acquaint you with the gravitas and solemnity which permeates his entire blog.

He writes, “I started this blog when a lady called Stephanie said “Oh John, please write a blog, it will only be for a week and won’t take up much of your time.” That was back in 1492 and here I am still writing in the same pair of underpants. I am Carnival’s Senior Cruise Director and Brand Ambassador, and I am here to share my life with you in all its boring and sometimes toilet-based glory.”

If you think my “Fool Disclosure” page is a little weird (and that does seem to be the general consensus among my readers), you should check out John’s “Disclaimer Thingy”.   John’s 15,000,000 views and counting make my page views look like a rounding error.   When you consider he began blogging, by his own admission, in 1492 and my humble blog is still swaddled in a preemie blanket, it is probably juvenile of me to be gripped by this insane blog envy I’m feeling.   I ask you, dear reader, would it be too much to ask for John to loan me, say, half-a-million page views until I get on my feet?   He would never miss them.  Heck, that’s just a couple of good weeks for John.

But enough about my own fragile psyche.  Let’s catch up with John and see what he the heck he is up to these days.

Q.  John, tell us a little about your upbringing.   Have you managed to squelch that ugly rumor knocking about (no pun intended) that you are the illegitimate love child of John Cleese and Margaret Thatcher?

A.  I was a cesarean baby which is why every time I get out of the car I go through the sun roof. OK, after that stupid joke I should say that I have been very lucky. I worked as a commodities broker and for Lloyd’s of London in England. Then In 1987 and much to the distress of my parents I answered a magazine (remember magazines?) article for cruise ship staff and began working for Carnival Cruise Lines as a bar waiter. I did not know the difference between a Pina Colada and a Slippery Nipple so the beards gave me a microphone instead and told me to be a social host. From there I became a cruise director in 1991 and senior cruise director in 2004. I was recently given the title of Brand Ambassador, as well. I am one lucky sod! I was a huge Thatcher supporter and Cleese is my idol so that is actually a compliment.

Q.  What was your first job with Carnival and in which century was that exactly?

A. I flew from Heathrow to Miami in 1987 to take up the position of bar waiter on the cruise 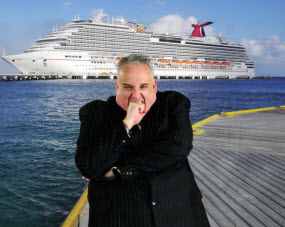 ship Holiday. When I landed I had to find my own way to a hotel which was called the Colonial Hotel. It made a Turkish prison look like the Ritz. I was there three nights waiting for the ship to arrive in Miami and it took every bit of my will power not to leave. But that Saturday the MS Holiday arrived and on I went. My training as a bar waiter was intense. The bar manager gave me a tray, a pair of white gloves for formal night and said “go and serve drinks.” That was it. How things have changed today and I am proud to think that I am still probably the worst bar waiter Carnival ever had.

Q.  Would you describe a typical day in the life of John Heald?  Reader alert:  If references to a grown man working in his underwear are apt to make you queasy, skip to the next question.

A.  It sounds like a cliché but there really isn’t a typical day. With 4,000 different guests on board the Carnival Breeze each cruise there are new challenges each day. However I do mix my day between managing 70 staff, 4,000 guests, writing a blog, answering an average of 50 Facebook questions a day and most importantly being on stage and out with the guests which is still my favourite thing to do by far. One of the reasons I keep going is that no day is really the same and you never know what is round the corner……..and yes…..I blog best when I am dressed only in my XXL Marks And Spencers underpants.

As a shameless ploy to lure you back to this highbrow discussion, I am postponing the rest of my Q&A for John until my next post.  Now don’t go all mopey on me!   I promise John and I will be back before you can say “Honestly, there’s no rush!”

I have always liked the haunting, Vietnam-era melody penned by Jimmy Webb and popularized by Glen Campbell called “Galveston”.   I love the alliteration and especially the vivid imagery woven through the lyrics by the phrases “seawinds blowing”, seawaves crashing” and “seabirds flying”.

In keeping with the alliteration but totally devoid of any of the poetry, this blog post is al

l about “ships a sailing” . . . from Galveston, of course.  I am writing this post based on the assumption that some of you lost souls floating around out there in cyberspace are :

b)  find yourself as easily confused as I am regarding what options are available.  My condition actually used to be a lot worse back when I was dyslexic.  Fortunately, now I am K.O.

Anyway, here is the pop quiz question for this post.  How many cruise ship depart this fall and winter from Galveston?  If you answered “seven ships a sailing” you obviously have the song “Galveston” confused with “The Twelve Days of Christmas”.  If you answered five you are either in the travel business or have Google set as your home page.  If you had no clue, you may be a little surprised, as frankly I was, to discover that there are so many options

Just to make it as easy as possible for you to reach out to me with your next cruise booking, my team of crack researchers (and no, before you ask, we do not research crack around here) have crunched the algorithms, or whatever the heck you do with algorithms, and come up with the simple chart below.

This will get you started but you are still going to need expert guidance regarding the differences between these cruise lines, the characteristics of the various ships, the pros and cons of the various itineraries, whether it is appropriate to wear your Tommy Bahamas shirt on formal night, etc.  Fortunately,  that’s why we skilled cruise specialists spend all those grueling hours sailing through the Gulf and the Caribbean.  It may have appeared self-indulgent but we were really fueled by altruism and perhaps the occasional foo foo drink.

While we are on the subject of  Galveston, it just so happens that this sea port is a very pleasant spot to spend a day or two pre or post cruise.  If you are feeling a little too euphoric, you can always visit Moody Gardens and mellow out a bit.  Conversely, if your life has been a little humdrum, schedule a visit to the newest attraction in town, the brand new Galveston Island Historic Pleasure Pier.

I don’t know about you but I am having one heck of a time getting that tune out of my mind.