My abject apology to English grammarians around the world (or better yet, across the seas) for trampling upon their sacrosanct rules governing comparatives and superlatives.  I was an English major myself so, for what it’s worth, my sin . . . while no doubt mortal in their eyes . . . was at least not committed unconsciously.  The reason for the title is simply that the time-worn phrase “Good, Better, Best” just doesn’t cut the mustard in this instance.  Shall I explain?  Indeed, I shall.

Royal Caribbean International next May will launch a newly enhanced luxury at sea program called the “Royal Suite Class”.  This program offers three levels of delicious self-indulgence.  Picture yourself standing on the spacious balcony of one of these suites as I was just a few days ago on the Anthem of the Seas.  Your gaze quite naturally falls first upon the glistening sea below, then rises to the brilliant sky above and finally, as twilight falls, to the luminous panoply of stars beyond.  Thus, the names of the three tiers almost begged from the beginning to be known as Sea Class, Sky Class and Star Class.  See how easy this all is when you have moi to guide you by the hand!

Something all three classes have in common is access to the Coastal Kitchen, a dining option exclusively for suite guests and Pinnacle members.  Think a fusion of Mediterranean coastline and California farmland.  They pretty much had me when I read about ” . . . Med-inspired tastes like Serrano ham, whipped goat cheese and roasted grapes.”  Granted “whipped” and “roasted” sounds a little violent from the food’s point of view but I am pretty sure you will enjoy the results!

This particular class has one category perfect for families.   On the Quantum Class of ships, the Family Connected 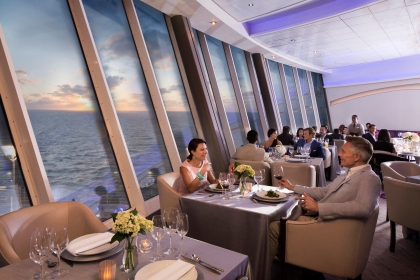 Junior Suite provides the greatest number of guests in connecting rooms of any suite configuration.  It provides space for up to 10 guests!

I am desperately trying to picture nine other friends,  relatives or even passing acquaintances willing to share that level of intimacy with me and so far I am drawing a blank.  If you find yourself both wealthier and more popular than your humble scribe (not a high bar), you will just have to move up to the Star Class on one of the Oasis class ships where the Four Bedroom Family Suite sleeps fourteen!

All three classes of suites afford access to two other fantastic features.  The first is the suite lounge where you will enjoy 24-hour access to this intimate setting which offers complimentary breakfast and evening drinks.  Secondly, you can recline in the comfort of a plush lounge chair and bask under the Caribbean sun in a private Sun Deck reserved just for you . . . well, you and a handful of other discriminating suite guests.

This year has been a pretty good year for you, all things considered.  Are you ready to take it up a notch?  If you have ever stayed in a five-star hotel, you know the value of a great concierge.  When you book this class, your exclusive concierge will assist you in booking priority reservations and theater seats.

Take a look at all the suite benefits and concierge services that are at your disposal.  You haven’t been pampered like this since you first learned as an infant to scream your head off in the middle of the night sending your parents scurrying about like the fire alarm just went off. 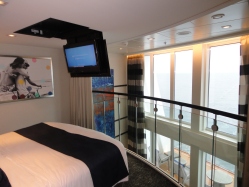 With all those inclusions, I have saved the bestest for lastest.  For the Star Class guests, Royal Caribbean is introducing something called the Royal Genie Service.

The concept is not just to attend to your every need and desire (legal and moral, let me qualify) but to actually anticipate them.  The rumor is that these future genies are being trained even as we speak at the London School of Mental Telepathy.

To summarize, the Royal Suite program will be available on two classes of ships:  the Oasis Class and the Quantum Class.  There are three tiers of suites:  Sea Class, Sky Class and Star Class.  Finally there are sixteen different categories of suites such as Royal Lofts and Owner’s Suite.

I beg you, don’t try to sort this out all on your own.  You will only bruise your precious little gray cells.  Instead, reach our to one of our Royal Caribbean experts.  Why not let your Royal Genie service begin with the booking process?

Over the past several days, I have been standing in tall cotton . . . as we are wont to say in the south.  Just consider these three fortuitous and unexpected events.  First, as mentioned in my previous post, I was one of five travel professionals selected from a pool of more than five hundred entrants to accompany approximately seventy other folks from the travel industry and the media on a special charter flight to Papenburg, Germany.  Our express purpose was to take a sneak peek at the soon to be launched Quantum of the Seas and later on the Anthem of the Seas. 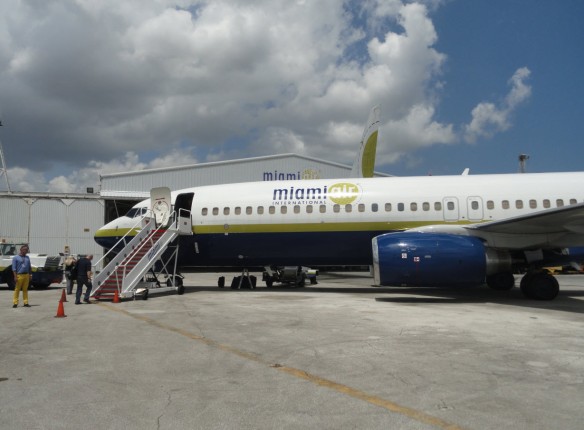 A quick shout out to Miami Air. The food was both abundant and delicious and the service impeccable. Thanks for a great ride!

Secondly, in the departure lounge, my name was randomly drawn from among the four other contest winners for a seat in business class. Finally, upon arrival, we were dispersed to various small hotels and I was dropped off at the Arkadanhaus Papenburg. This beautiful boutique hotel had only been opened two weeks.  No guest had ever slept in my room which pretty much eliminates all possibility of bed bugs (assuming I am not a carrier, of course!)  and was situated on the canal in the picturesque heart of the city.  Our hotel soon became the envy of the other participants.

In some circles of Christian theology, there is a doctrine called “dying grace” which holds that pious Christians who depart this life somewhat precipitously (as opposed to a protracted illness, for example) are often granted a few particularly glorious days just prior to their demise. My wife’s uncle, for example . . .  a true saint . . . was called home during a peaceful sleep following an especially memorable family Thanksgiving gathering a few years back.

Now when you consider that I will soon be boarding a flimsy aluminum tube where I will be careening through the lower levels of the stratosphere at 500 plus miles per hour over a vast ocean, I am sincerely hoping that the items catalogued above merely represent a run of Las Vegas style good luck rather than my personal experience of  “dying grace”.  I’m not quite ready, Uncle Murray!

Starting with the previous post and for the next several, I will devote my modest literary talents to bringing you along on my whirlwind 48 hour touchdown to lift-off odyssey. My challenge will to be to distill a barrel of fun into a few drops of valuable insight. Given the enormity of the task, you will find embedded in some of these posts a very liberal sprinkling of hyperlinks. In that fashion, what catches your fancy here can be perused in detail at your leisure.

Let’s begin, shall we, with the title? Merriam-Webster defines a quantum leap  as “a sudden large change, development, or improvement.”  A quantum

leapfrog is both coined and defined by your humble squire as “any sudden large change, development, or improvement that leaves your competition whimpering like a small child lost in the food court of the neighborhood mall.”  Royal Caribbean has thrown down the gauntlet and it remains to other cruise lines to accept the challenge. Those other cruise lines are in the unenviable position of having just watched RCCL vault over them in this multi-billion dollar game of leapfrog as if their feet were planted in concrete.

The remainder of this post, as well as subsequent posts on this subject, will be devoted to demonstrating the veracity of this admittedly bold assertion.

If you want a watch made, you go to Switzerland. If you want a world class ship built, you hire the Germans. You should take a moment and read this brief history of the Meyer Werft shipyard. Upon our arrival, we lunched in a building converted from the former Meyer Werft factory replete with the original moveable cranes overhead.

Following lunch, we toured the Ems PreCab Cabin Factory. Did you know that every cabin 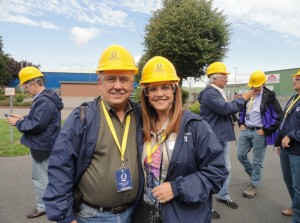 (some 2000 or so) will be built as a separate module and delivered to the ship to be inserted into its precise location? Nor did I. They have borrowed from the automotive industry the concept of a slow-moving (v e r y  s l o w  m o v i n g) assembly line where workers sequentially apply their own expertise. The picture on the left is Vicki Freed, Senior Vice President of Sales and Trade Support & Services, and your humble servant about to enter the factory.  It speaks volumes about Vicki’s generosity in risking her stellar reputation by allowing her photo to be taken with moi!

Following the visit to the PreCab factory, we moved over to the Meyer Werft shipyard’s Laser Hall and the Block Assembly and Building Hall where we saw the Anthem of the Seas in an earlier stage of construction. These great ships are built in sections and joined together with a very strong, water-resistant superglue. OK, I made up that last bit.

At 4:00 pm, sensing that sleep deprivation and our forced march were threatening to render us comatose, they allowed us to park our weary carcasses for the highlight of the day, the live web cast “Reveal” staring RCCL’s own Chairman of the Board Richard

Fain and technology guru David Pogue. “And what exactly did they reveal?”, I know you are dying to ask.  I will tell you . . . next time.  That is what those in the news biz call “a tease”.   For those who were hoping for a detailed listing of the many virtues of the Quantum of the Seas,  just watch for the next post.  The Quantum tour was day two of our trip.

Here is a quick summary of the remainder of day one. Enjoyed a very nice dinner. Crashed and burned. Awoke half an hour later to the ear-piercing sound of fireworks being set off directly outside my window which thunderous racket in my stupor I somehow wove into a dream about a surprise Russian invasion of the Ukraine. Let’s all pray that part was just a bad dream.

If you would like to see all the pictures I took on my trip, click here.  Now is your chance to participate by taking this short survey.