Last post, you may recall, we began a little trek across Mexico City by private car with our first two stops along the way the Downtown Mexico hotel and the Habita hotel.  I pointed out that the Downtown is in the epicenter of the action (perfect for those who crave excitement) and Habita is in the heart of the haut monde (ideal for inveterate people watchers.)

Today we complete our tour with two more sparkling gems in the GrupoHabita collection. I realize nearly a week has elapsed but hey, I did warn you, Mexico City traffic can be brutal.  I don’t know about you but I thought we would never get around that turnip truck!  The consolation, if you need one, is that these last two hotels are well worth the wait.

The two-fold attraction of the Condesa df hotel is its quiet, tree lined setting and its classic charm.  As to the setting, it is situated across from Parque España in what might be described as a hip, Bohemian section of Mexico City.  It is relatively close the airport and very near to the Bellas Artes Palace, the Anthropology Museum and Chapultepec Castle.   A piece of quick trivia.  My avatar, which I use for this blog, was taken from the ramparts of Chapultepec Castle with Mexico City in the background.

As you see from this picture to the right, the exterior has a unique triangular shape reminiscent of the

Flatiron building at 23rd and Broadway in New York City.   (Ask me about the origin of the expression “23 Skidoo” in a comment on this post, and I will share another interesting bit of trivia in my answer.  Consider it a free bonus!)  The building is done in 20th century French neoclassical style and exudes warmth and hospitality. 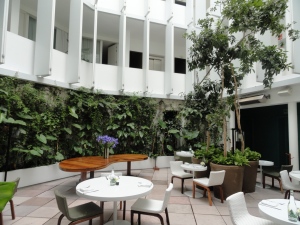 The most striking feature of the hotel is the interior courtyard hosting a restaurant and bar where you can enjoy breakfast, lunch or dinner.  Were I to book a stay there, I picture myself relaxing often on The Terrace which overlooks the tranquil neighborhood while sampling their specialty of succulent sushi.

You might want to take a moment and peruse Trip Advisor where you will find mostly positive comments and a few I would even call glowing.  After viewing the property, I am not at all surprised that so many reviewers were on their sixth or seventh stay.  If I were going on vacation in Mexico City, this might well be my selection.

Our final stop will be at the truly unique Distrito Capital, my own humble abode during the F.I.T.A. event I wrote about previously.  The hotel shares a high-rise building with office tenants on most floors and, on the ground floor, various retail businesses. This hotel is located in the Santa Fe area of Mexico City which is where many international and domestic corporations are based.  It is very much a business hub for the city.

The lobby is on the fifth floor and the rooms are on 25-28.  The lobby, bar, pool area and small meeting room are all on the fifth floor.  Here is a series of pictures to give you a sense of how contemporary and funky (in the best sense of that term) their public space really is.

If you have marked Mexico City off your list of must see destinations, for whatever reason, I strongly encourage you to add it back.  This is simple too magnificent a world class city not to experience at least once.  Whatever your purpose in coming and regardless of your tastes and inclinations, I am certain that one of the four GrupoHabita properties I have shared with you will fit the bill.

Take a moment and let me know in the poll below which hotel strikes your fancy.

I recently returned from five days in Mexico City attending F.I.T.A., the International Travel Fair of the Americas.  Since I was there on business and could not fully indulge my tourist yearnings, just driving around the city reminded me what a wonderful destination Mexico City really is.

I know, I know.  The mere mention of the city in some quarters prompts an immediate outbreak of hives.  Since this post, and the one following, are devoted to presenting a very unique chain of boutique hotels, I can’t spare the space here to disabuse you of any exaggerated concerns you may harbor.  I refer you instead to a previous post called Mexico Maligned that addresses my views on the important subject of security.

During my visit I was assigned (as a hosted guest) to a hotel in the Santa Fe sector of Mexico City near the Bancomer Convention Center where the event was held.   Only after talking to other participants spread among several perfectly acceptable hotels did I come to realize how fortunate I was to have landed at the Distrito Capital.   As the title of this post indicates, Distrito Capital belongs to a chain called GrupoHabita with twelve hotels spread across Mexico and even one more in New York City.  I understand there are a couple more hotels on the near horizon.

On my one free afternoon, I booked a private car and visited all four of their hotels situated in Mexico City.  In this post and the next, I will share a brief, general impression of each of them.   The old saw in real estate is that the three most important things are location, location and location.  In terms of deciding which of these hotels might suit your proclivities, location in a city the size of Mexico City is surely a critical element yet not the only consideration.  With four hotels so distinct, at least some weight should be given to style.

Let’s take a brief jaunt, sans the infamous Mexico City traffic, and find out which hotel is perfect for your next visit to Mexico City.

Are you the type of person that loves to be in the geometric center of things?  Would you like to take two steps out your front door and be engulfed by the glory that is Mexico City?

If that describes you, you need look no further.  This is one hotel whose name says it all.

When you enter off the street, you pass through a bustling restaurant and ascend this striking staircase pictured to the right.  Downtown is located in a magnificent 17th century building and is one of the oldest extant former residences in the city.  Because the hotel shares space in the edifice with several other bars and restaurants, you may be a little confused as to where this 17 room hotel ends and other venues begin.

The hotel sports a charming rooftop terrace and bar which offer a sweeping view of the busy street below.  There is even a small swimming pool on the roof.  This hotel just opened in August under the capable leadership of the fresh-faced general manager, Adalberto Reiter.   He may look like an urchin just pulled in off the street, dusted off and dressed up in a suit and tie but he actually has a few years of experience under his belt in satisfying demanding clients.

One of the most unique features of the hotel is a split level terrace.  The pool and deck pictured here are on the 5th floor and if you climb the short spiral staircase to the left of this picture, you will find yourself on the 6th floor open air terrace and bar.  The 12 foot long fireplace will take the edge off the cool night air as you sample their wide selection of tapas and libations.

This hotel is one of Mexico City’s most popular showcases for various social events and it would be an unusual stay if you did not get a chance to rub shoulders with some of Mexico City’s glitterati.  As an added bonus, with just 36 rooms, you are unlikely to get lost stumbling back to your room after an evening of rooftop revelry with the haut monde!

Check back next time and I will take you on an armchair site inspection of Condesa df and Distrito Capital.